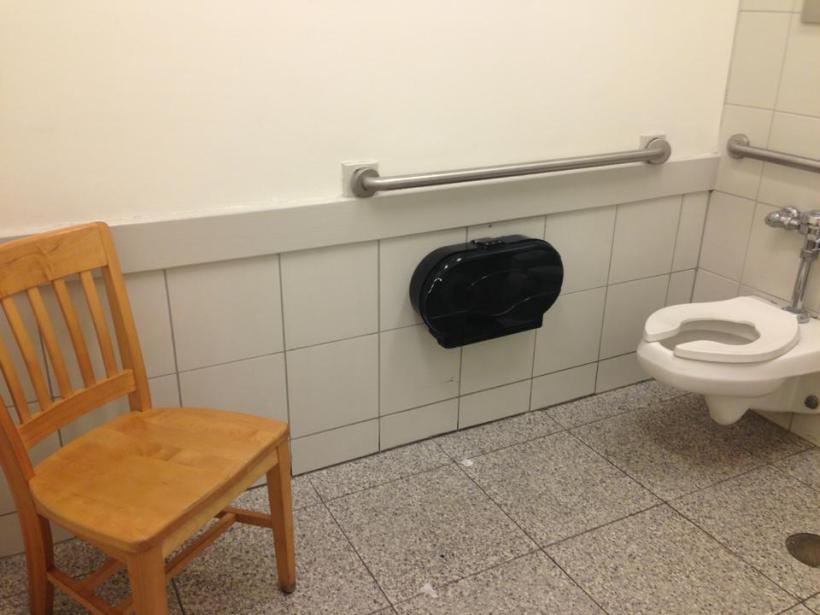 Anthrolactology is not my first foray into the blogosphere. Last year, I attempted to start a blog on the topic of pumping at work. My idea was to document the balancing act of working and breastfeeding through contributors’ stories and photos. A couple of things inspired me to do this.

First, I kept seeing stories of the  poor conditions employers expected mothers to pump in. For example, ACLU blog featured a story by Bobbi Bockoras with the headline, “106 Degrees and Dead Bugs. ‘Good Enough for Breastfeeding Moms?” Bobbi wrote,

This is the story of how I ended up pumping breast milk while sitting on a filthy floor, covered in dirt and dead bugs, at the plant where I work – and what I decided to do about it.

This is the photo of her workplace lactation room:

Isolde Rafferty, created a slideshow of workplace lactation rooms around Seattle that went viral. Stories like these are not unique.

Back in 2006, Jodi Cantor wrote an eye opening piece in the New York Times about mothers struggling to balance work and breastfeeding. She made the astute observation that women in the U.S. who were able to successfully juggle career and breastfeeding had high socioeconomic privilege:

But as pressure to breast-feed increases, a two-class system is emerging for working mothers. For those with autonomy in their jobs — generally, well-paid professionals — breast-feeding, and the pumping it requires, is a matter of choice. It is usually an inconvenience, and it may be an embarrassing comedy of manners, involving leaky bottles tucked into briefcases and brown paper bags in the office refrigerator. But for lower-income mothers — including many who work in restaurants, factories, call centers and the military — pumping at work is close to impossible, causing many women to decline to breast-feed at all, and others to quit after a short time.

It is a particularly literal case of how well-being tends to beget further well-being, and disadvantage tends to create disadvantage — passed down in a mother’s milk, or lack thereof.

Although I have been very fortunate (“privileged”) to have had lovely, private, sanitary, and well-equipped lactation rooms to pump in, I know my experience isn’t the norm.

In interviews with mothers across the nation about milk sharing, I’ve listened to dozens of stories about the challenges of pumping at work. One African-American woman told me that at her job working as a cashier in a drug store, she was expected to pump in the break room or her car. She was given short breaks to pump, but had to do it in full view of others, who were also free to come in and out as they wished. There was no place for her to wash her hands or clean her pump. She had to store her milk in a small refrigerator where anyone could tamper with it. As embarrassing as it was, she pumped in the break room, because her baby did not do well on formula and she was determined to breastfeed as long as she could. Eventually, she decided to start pumping in her car, so she wouldn’t have to face her sneering co-workers and boss. In an effort to limit the number of times she had to go and pump, she tried waiting longer and longer stretches in between pumping, which usually led to painful engorgement. Over time she noticed a drop in her milk supply.

Sadly, she isn’t alone. Lots of women are being asked to pump in break rooms with no privacy, no sink, and no safe place to store milk while at work. Not only are these conditions humiliating, they can lead to lower breastfeeding rates.

The situation in public spaces is equally bad. Mothers are often expected to breastfeed their baby or pump in family bathrooms. It should go without saying, but NO ONE SHOULD EVER BE ASKED OR SHAMED OR PRESSURED TO FEED THEIR BABY NEXT TO A TOILET!! Period.

Likewise, a restroom is  not an appropriate accommodation for sanitary milk expression at work (ABMs guidelines for safe milk expression to reduce bacterial contamination).

One group who has an extremely tough go at pumping at work are military moms. Imagine being out doing field exercises and your only option to relieve painful engorgement is to hand express, with everyone watching. Or walking down the hall to go to pump and having colleagues and senior officers jeer loudly. This is what women in the military have described to me. Breastfeeding in Combat Boots has done so much to raise awareness of these issues and provide resources to support of these amazing women. More needs to be done to support them.

The “class system”of breastfeeding that Cantor alludes to is also evident among women who are milk sharing. Moms who reported that they didn’t make enough milk were less wealthy, had lower levels of education, and reported lower employer support for breastfeeding at work.

Of course, there are employers who DO provide their employees with the kind of high quality support that is outlined in the Business Case for Breastfeeding guide:

I would personally like to see policies in place that reflect a high value on families generally – you know, like paid maternity and family leave. I think a year is reasonable, given what other WEIRD (Western, Educated, Industrialized, Rich, Democratic) nations offer.

(Oh look, there are non-WEIRD nations up there, too…)

There are lots of reasons to get behind paid maternity leave and other family leave benefits, not the least of which is to give parents a chance to bond with their babies. The other, which is obviously important to me, is that paid leave also creates an environment where meeting AAP recommendations for breastfeeding  might be possible for all mothers who wish to breastfeed, not just the most privileged.

Until then, providing mothers with a supportive workplace, safe and sanitary places to pump, and time to practice this small, but significant, act of caregiving while they are at work, just doesn’t seem like too much to ask.

The old blog has since been laid to rest. However, it did have one really good post, written by a friend, and lots of people enjoyed it. So, I’ll reblog it next, as it’s too good to have been left behind. Plus, it was written by an archaeologist, so we still have the whole anthrolactology theme goin’ on!