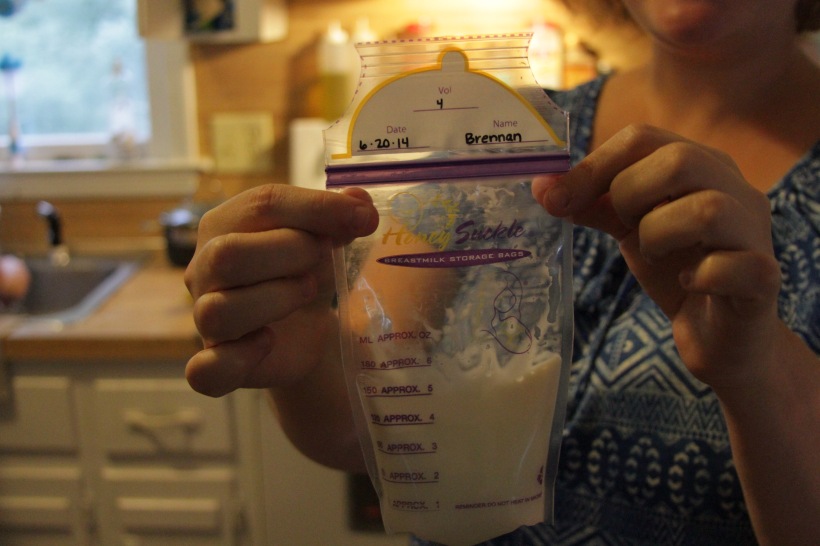 A few days ago, the BMJ published an Editorial about the Risks of the unregulated market in human breast milk. In a matter of hours, this piece was trending across Facebook and Twitter. Al Jazeera  even ran a story featuring this piece. The commodification of human milk is a hot topic, with the Medolac debacle in Detroit, athletes buying breast milk online to enhance their fitness, the New York times coverage of growing profit-driven interests in lactoengineering, and now this.

I read all of these stories with interest, but generally find myself frustrated with the lack of precision used to describe nuances between human milk sharing, milk sales, and milk banking.  These distinctions are important. You can’t take the risks of online milk sales and apply them wholesale to milk sharing. Those in public health and medicine need to understand these differences so they are able to engage these issues through policy and clinical practice. The public – and in particular parents as well as potential milk donors – need to understand these differences, so they can make informed decisions.

In 2013, when the highly publicized study of the microbial contamination of human milk purchased online  was published in Pediatrics, myself and colleagues put together responses (here and here) to draw attention to the conflation of milk sharing and anonymous milk sales, which was at the heart of sensationalized media coverage of this study. Needless to say, our responses didn’t get much attention. Balanced, evidence-based commentaries of these issues typically do not, precisely because they don’t try to sell the idea that breast milk is intrinsically dangerous.

One of the reasons that people like me are wary of fear-based language, whether as part of a health campaign or a seemingly benign news story, is that such language has been historically been used to deliberately undermine mothers’ confidence in their ability to nourish and nurture their babies through breastfeeding. Fear was used to sell mothers scientifically engineered products that corporations (like Nestle) and doctors claimed could provide babies what a mother’s own milk could not. Fear was used to create general anxiety around early uses of donor  human milk. We catch a glimpse of this history every time a mother is told that her milk isn’t nutritious enough, plentiful enough, sterile enough, or that it can be easily replaced by equivocal forms of nutrition, such as infant formulas.

More to the point, opinion pieces like the one published in BMJ get lots of play because they focus on the dangers of human milk, and in the process spread some misinformation.

Inspired by the folks at Red Ink, I decided to dust off my red professor pen, to fix a few things: 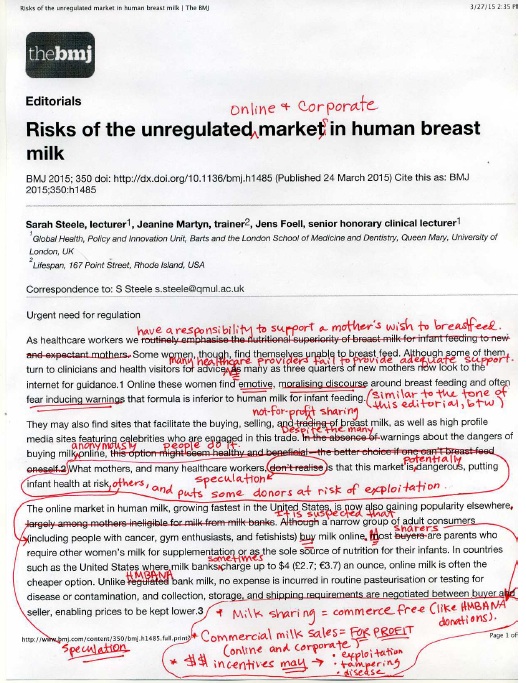 Commercial milk markets and milk sharing are not the same. These activities may both be facilitated by online social networking, although they also occur offline. Milk sharing typically refers to a commerce-free donation of milk that is privately negotiated between a breast milk donor and a recipient family. Milk sales involve paying a donor for their milk.

Distinguishing between anonymous and informed milk sharing or milk sales is important when considering relative risks. With the Internet, it is totally possible to procure milk from a donor without meeting them, asking any background information, or having any idea about who they are. One study has demonstrated that milk purchased anonymously online and is shipped for delivery carries risk of microbial contamination. We have no idea how often this actually happens, though, as there have been no studies that describe who is engaged in the commercial markets of human milk, online or offline.

Milk sharing is not anonymous. Mothers who share their milk meet and screen recipients to make sure it is going to an infant in need. Parents screen potential donors and meet them, whenever possible, prior to accepting milk for their baby. Milk sharing also often occurs between family members and friends, online and offline. This has been substantiated in four separate studies of milk sharing, including my own [1-4]. There is no standard protocol for milk sharing screening, however, and screening practices reflect a great deal of variability [5].

People who use online social networks to find SHARED donor milk are parents looking for human milk to feed their babies. To be more precise, in our recent published study we found that most of these parents are breastfeeding mothers  who have tried to breastfeed, but have experienced disrupted lactation [6]. There are countless ways people come to milk sharing, and just as many types of milk sharing experiences as there are people who share milk. The vast majority of milk sharing donors give milk as a gift without any expectation of compensation. Health care providers have not generally been involved in milk sharing decisions, though that appears to be changing rapidly.

HMBANA milk banks are non-profit organizations, so while there is a price associated with banked milk that is sent to hospitals, these costs cover the expenses associated with screening, testing, pasteurizing, and dispensing milk. The HMBANA does not offer payment for donor milk because of ethical considerations associated with economic barriers to this milk, particularly for critically ill infants. They also rely on unpaid donations as a way to remove financial incentives that may inspire donors to divert milk from their own infant as a way to increase personal profit. HMBANA’s mission is to provide milk to medically fragile preterm babies, regardless of a family’s ability to pay. Still, there are numerous barriers in gaining access to HMBANA donor milk, which is one of many reasons why parents choose other alternatives, even infant formula. By the same token, there are also families who have access to HMBANA milk who choose not to use it.

The sale of human milk, and human milk derived products, may involve private negotiations between individuals, but increasingly involve commercial profit-driven interests. Companies who pay donors for their milk often utilize online platforms to facilitate networking and recruitment. Donor milk is then used to develop patented human milk-based medical technologies, which are meant to be sold for profit. The introduction of financial incentives for human milk, both between individuals who meet online and for corporations, carry numerous possible risks and ethical dilemmas: tampering of milk (adding formula, cow’s milk, or water to increase volume of milk); diverting milk from one’s own infant or weaning earlier than planned in order to increase their profit-making potential; potential for exploitation of donors who are vulnerable to predatory recruitment practices; potential exploitation of recipients who are vulnerable to predatory marketing practices; narrowing of already limited access to human milk to babies whose survival may depend on it; and further decreasing access to human milk for all babies in the general population whose short-term and long-term health may benefit from it. These risks extend well-beyond risks of disease, and warrant greater scrutiny. It would also be helpful to know more about women’s engagement with these profit-driven activities, to better ascertain the extent to which these risks of exploitation are realized in everyday life.

It is widely recognized that, in most circumstances where there are no contraindications for a mother breastfeeding her own baby, any form of infant feeding other than mother’s own milk carries risks and benefits that must be taken into consideration. The WHO recognizes this, and recommends that while contextual factors must always be weighed, the milk of a healthy breastfeeding donor is considered just as appropriate as banked donor milk (which is not universally available), and that both of these options are more desirable than infant formula. Probably one of the most thorough and eloquent reviews of the relative risks of various infant feeding methods, however, has been written by Karleen Gribble and Bernice Hausman [7].

The Conversation We Should Be Having….

The first priority in reducing a demand for donor human milk should obviously be providing better support for breastfeeding mothers in the first place. If breastfeeding is treated as a basic human right, then any mother who wishes to breastfeed should be given every resource available to support her in reaching that goal. When this is not possible – and there are many reasons it may not be possible – a baby’s right to human milk should also be protected, as a human right, if this is a parent’s wish. (Some may even argue that this should be the case, even if parents do not consent.)

From where I’m standing, the regulation of anonymous online milk sales is a red herring. I know it’s different in the UK, but here in the U.S. we have race and class-based disparities in infant mortality, preterm birth, and early breastfeeding cessation that, frankly, deserve far greater attention and resources than the regulation of online commercial milk sales. Our efforts and resources should be poured into making breastfeeding an attainable reality for all mothers, not just the privileged few. Critically ill infants need human milk to survive and thrive, but all infants in need should have access to human milk.

If regulation or policy can help to level the playing field so that increased breastfeeding and access to safe donor milk may become a reality, then that’s a conversation worth having. But, I would rather get busy tearing down barriers that stand in the way of mothers breastfeeding their own babies and figuring out ways of delivering breast milk from healthy donors, wherever and whenever it is needed.

REVISION 30 March, 2015 – Please see the Steele et al’s response to this blog post and other critiques of their Editorial here.

10 thoughts on “About that BMJ Editorial…”