and so I bring you “who manages the mammaries: physiology edition”, specially looking at how milk synthesis starts and milk supply is maintained. I think this will be useful for the overall trajectory of the multipart series emerging here.

The onset of milk production occurs with lactogenesis. In humans, this is split into two general stages, the first occurring during the transition from pregnancy to lactation and the second characterized by secretory activation of the mammary gland. More than simply the onset of milk production, each discrete physiological phase hallmarks a number of important cellular changes within the mammary epithelium and the mammary ducts. The first phase, secretory differentiation, previously called lactogenesis I is followed by secretory activation, formerly known as lactogenesis 2, is characterized by a shift to full milk production and further cellular level changes (Neville et al., 2012). Secretory activation is usually complete within 72 hours following birth, however there is an increased incidence in delayed activation among American mothers (Nommsen-Rivers et al., 2012) compared to other populations where lactogenesis may occur much sooner. The transition from secretory differentiation to activation also signals the shift from endocrine to autocrine control (Riordan and Wambach, 2010).

The secretory differentiation phase starts during the later half of pregnancy, and is characterized by an overall increase in breast size, reflecting both ductal growth and the terminal differentiation of mammary epithelial cells into mature mammary epithelial cells (lactocytes) capable of producing milk. Lactocytes begin secreting fat, protein, and lactose (Riordan and Wambach, 2010) in small amounts. During this period, the gap junctions between the lactocytes are open, allowing for the passage of larger molecules between the cells and into the milk. Following the decrease in circulating progesterone levels after the delivery of the infant and placenta, the gap junctions between the lactocytes close. “Copious” milk production, characteristic of secretory activation, starts with this shift to autocrine regulation. Milk synthesis will be maintained by both galactopoietic hormones and milk removal after day 3-8, depending on individual variation.

The mammary glands are highly vascularized, with two main arteries – the internal mammary artery (anterior & posterior branches) and the lateral mammary branch of the lateral thoracic artery, although in about 30% of women, other arteries may also contribute to mammary blood flow. Blood supply to the breasts more than doubles during pregnancy and remains stable during lactation. The increase in blood supply is necessary to provide resources to the individual lactocytes and surrounding cells such as myoepthelial cells and adipocytes (fat cells). Aljazaf (2005) estimates that the ratio of milk yield to blood flow is 1:500, highlighting the importance of a large blood supply for these tissues, although Geddes (2012) cautions that there is not clear evidence for a direct link between mammary blood flow and milk synthesis rate. Within the breast, lactocytes line each alveolus with a single layer of cells. Each cluster is surrounded by myoepithelial cells and fat cells (Figure 1). There is little evidence for nerves extending to the individual alveolus, although certainly both larger and smaller nerves are found throughout the breast. However, myoepithelial cells and lactocytes have a constant blood supply, allowing for hormonal signaling as well as cellular uptake of glucose, fatty acids, amino acids, and other substances.

Regular – but not necessarily scheduled – removal of milk from the breasts is necessary to maintain milk synthesis following secretory activation. Breastfeeding or milk removal is not necessary for the onset of milk synthesis but is necessary for continued synthesis. Often described simply as a “supply-demand response” (Riordan and Wambach, 2010), milk synthesis is in fact an elaborate orchestration. Infant suckling, through the stimulation of nerves in the nipple, triggers nerve pulses to the supraoptic and paraventricular nuclei of the hypothalamus. Paraventricular neurons project to the posterior pituitary, where stimulation leads to the release of oxytocin (Rinamen 2007); similar neuron projections trigger the release of prolactin from lactotrophic cells in the anterior pituitary (Kiss et al., 1986). Oxytocin and prolactin travel through maternal circulation to the mammary gland, where oxytocin binds to specific receptors on myoepithelial cells and prolactin to prolactin receptors on the lactocytes themselves (Figure 2).

The binding of oxytocin to the myoepithelial cells triggers the cells to contract. These contractions force milk into the ducts. Progressive contractions will push milk progressively through the ducts towards the nipple, provided the infant (or breast pump) is maintaining a vacuum (Ramsey et al., 2005). Blood flow to the alveolus decreases just prior to milk ejection followed by an increase 1-2 minutes later (Geddes 2007).

Meanwhile, prolactin binds to prolactin receptors on the lactocyte, specifically those expressed on the basal membrane side in contact with the maternal blood supply (Figure 3). Binding activates transcription mechanisms in the lactocyte, leading to the activation of genes for the production of milk proteins and lactose (Mohammad et al., 2012; Rhoads et al., 2009), as well as fatty acid synthesis and assembly of the milk fat globule (Maningat et al., 2009). Although prolactin peaks following nipple stimulation, there does not appear to be a direct association between circulating plasma prolactin levels and the rate of milk synthesis (Cox et al., 1996), and maternal prolactin levels decrease over the course of lactation. It is likely that autocrine regulation is largely responsible for local control of milk synthesis rates. Daly et al., (1996) have shown that breasts holding more milk (with longer interfed intervals) have decreased milk synthesis rates compared to empty breasts, providing an explanatory framework for the 17-33 mL/hr rate proposed by Arthur et al., in 1989. This may also explain why milk fat increases from fore to hind milk (Daly et al., 1993; Kent et al., 2006) – the cellular machinery for producing milk and the uptake of long chain fatty acids from maternal circulation are increased, facilitating the transfer of fat into milk. Additional hormones, including glucocorticoids such as cortisol, and metabolic hormones such as insulin, appear to also play a role in milk synthesis and mammary function. Glucocorticoids may prioritize glucose for mammary tissue and amplify the effects of prolactin on milk protein synthesis while insulin appears to play a role in maintaining the integrity of the mammary epithelium itself. 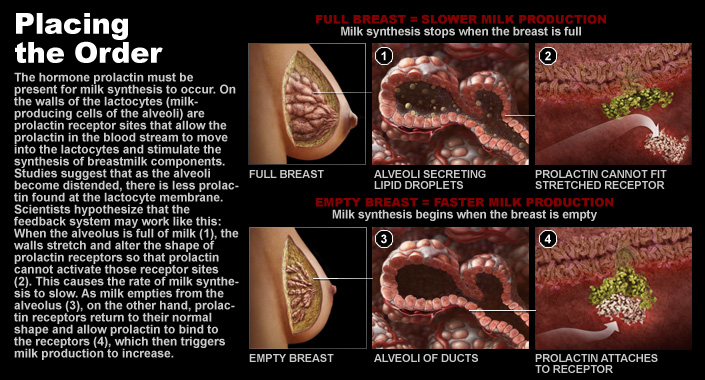 And this system works pretty well – except when it can’t. And one big risk of reducing milk synthesis is letting too much milk accumulate in the ducts and alveoli without regular emptying. As milk accumulates, certain areas of the ducts may distend slightly. This distension leads to two primary problems: 1) increasing concentrations of feedback inhibitor of lactation in the milk in the ducts (Peaker, 1998) and 2) distortion of the lactocytes themselves. This distortion limits the ability of prolactin to bind to its receptor on the lactocyte and decreases milk synthesis (Streuli et al., 1995).

It’s actually a very elegant system, set up to minimize waste. If the infant is eating less, either because of supplemental foods, illness, or infant loss, decreasing milk synthesis is actually not a bad idea. It takes, based on the calculations by Prentice et al., (1988) considerable energy to produce milk – about 77.2-80.3 Calories per 100 milliliters of milk (72.66 Calories received by the infant) or about 90-94% return on investment. Still, if you figure 750mL of milk per day, that’s 579+ calories per day and if the infant is not eating all 750 mL, reducing synthesis saves energy.

It is only when the system gets out of whack – possibly because of scheduled feedings, supplemental foods (especially formula), infant illness or poor latch/vacuum – that milk synthesis is down regulated when it does not need to be. Essentially, the physiology is responding to the change in demand – the shifting baseline (Olson 2002). And like any shifting baseline, the change is often gradual, tiny decreases accumulating over days. This can lead to an actual decrease in milk supply, as the breast “thinks” the infant is getting enough to eat. The good news is, it is reversible – the same signals that communicated “too much” can signal “not enough” provided the stimulus is there. The reality is though, that for most women (except that ~5%) with “low milk supply” nursing more can help with milk supply.

IMAGES: All images from the VisualMD.com

Kiss JZ, Kanyicska B, Nagy GY. (1986) The hypothalamic paraventricular nucleus has a pivotal role in regulation of prolactin release in lactating rats. Endocrinology. 119(2):870-3.

One thought on “Who manages the mammaries: physiology edition”