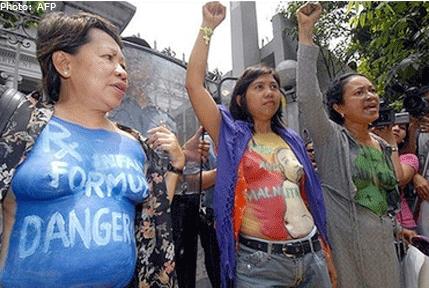 Breastfeeding is the cornerstone of public health. I’m certain right now you are having a knee jerk reaction and correcting me. No, some are thinking: it’s vaccines. No, others will say: it’s clean water. No, I maintain. It’s breastfeeding. Because breastfeeding is part of both of these and more. This point is fundamentally important to our conversations about breastfeeding – even if from our privileged positions in higher income nations – the reality is that more breastfeeding would save an enormous number of lives 1. In the United States, the most recent published estimate is that 800+ infant lives a year would be saved if the United States simply meet the Healthy People 2020 Goals 2.

Breastfeeding and breast milk came back into the news last week following news that the United States threatened economic sanctions and a loss of military aid against Ecuador for proposing a referendum to support the WHO Code for the Marketing of Breast Milk Substitutes. This blew up when US President Trump tweeted that this was “fake news” and “Many women need this [infant formula] because of malnutrition and poverty”.

There are many, many things wrong with this statement. In the coming weeks, we will each write about the ongoing controversy from our areas of expertise. As the biological anthropologist of the group, I will specifically focus on the composition of human milk and the benefits of breastfeeding, especially for women living in poverty and its close associate malnutrition. But first: what is the World Health Organization (WHO) Code?

The WHO Code for the Marketing of Breast milk substitutes was first published in 1981. It is a voluntary code of agreement by nations to regulate the marketing (not the sale) of infant formula. It does not make infant formula illegal or impossible to get. It simply limits how infant formula can be marketed no ads, no pictures of human infants, no free samples to mothers). That’s it. You can still go and buy infant formula in any store (see figure 1).

The kind of poverty and malnutrition referenced in this unfortunate tweet is most likely caloric malnutrition – the kind of undernutrition that is common with extreme poverty (living on less than $2 day), war, displacement, famine and drought. However, it is worth noting that poverty in the United States is rarely found with this level of malnutrition but instead occurs with a different form of malnutrition: overweight and obesity from having to rely on inexpensive, calorically dense but nutritionally poor foods. Both kinds of poverty associated malnutrition are important here, as for mothers with undernutrition or obesity, breast milk is often treated as suspect – something that might increase the infant’s chances of either undernutrition or obesity depending on maternal status.

When we get to poverty as a reason to use infant formula, all logic seems to break down. Infant formula costs money whereas breastfeeding is produced by the maternal body and costs much, much less. A low estimate for the cost of infant formula for the first year of life is $1734 (United States) – for store brand infant formula. Specialty formulas and commercial brands can cost much more. The infant formula industry is a 70 billion dollar a year industry3 (Yes, B – billion). That is 35x the net worth of Oprah. Half the net worth of Jeff Bezos. That’s a lot of money up for grabs every year. And breastfeeding? It is “free” but not really. How then, does marketing formula – which has to be purchased – help reduce poverty?

Breastfeeding does take time, and the cost of this time comes at the expense of other activities mothers could be engaged in – such a working for pay or caring for other children or raising crops. However, there is not the direct outlay of capital to any business – and certainly not the expense associated with infant formula, where in some developing countries, the cost of infant formula can be more than half of a household’s income. To replace something that is superior and available at minimum cost to families.

This is the area of this debate I am going to focus on – my co-editors will be adding depth and wisdom on the points raised above. I wanted to lay out the background to get to my point:

There is this stupid and incorrect belief that poverty and malnutrition mean a woman can’t or shouldn’t breastfeed because the quality of their milk will be lessened.

There is a horrible, incorrect assumption that poverty and malnutrition will impact the quality or quantity of a woman’s milk and somehow her infant would be “better off” with formula than the milk she would produce.  That infant formula is a miracle of science that will “save” malnourished babies when in fact the truth is often the opposite – behind the malnourished baby is an empty bottle far more often than an empty breast 4–6. While initial samples of infant formula may be given freely, over the long term, infant formula is far from free3. This economic pressure can force families to overdilute formula – reducing its nutrition and increasing the risk to infant of water toxicity. It can also lead to the substitution of much more dangerous foods – such as flour, canned milk, and sugar – to stretch infant formula.  Formula left over after a feeding may not be thrown out after a feeding but saved for later consumption and any flies or other insects that got into/on the bottle will simply be removed. I’ve literally seen hard working, poverty-stricken families in the Philippines doing all of these things. These are families working hard, long hours who are doing their best for their children and are not acting out of ignorance or greed but out of poverty.  And here’s the thing: poor and malnourished mothers do not need formula. They need social support programs that promote breastfeeding, family planning, access to healthcare and poverty alleviation. Because human milk is just that damn important as a cornerstone of public health 1.

Multiple studies conducted in dozens of populations around the globe have shown that maternal nutrition does not change the nutritional composition of human milk 7, despite widespread belief otherwise. The breasts are an amazing buffer: capable of synthesizing protein, fat, and sugars from available resources either from the maternal diet, mother’s body fat, or, if necessary, from other maternal tissues. Breasts are so good at this that if a mother is on a low fat diet, her milk still contains adequate amounts of fat because her breasts make the fat using special pathways found only in the breasts and the liver. While there is some evidence that within populations heavier women produce milk with more fat, there appears to be a minimum amount of fat (about 4 g/100ml) in human milk that is separate from women’s body fat 8,9. And overweight and obese women do not produce higher fat milk either – milk fat starts to decline towards the species average. People are not rats who need food to make milk –  we can produce milk from either dietary energy or body fat. However, chronic and severe maternal malnutrition may reduce the volume of milk mothers can produce 10 – and this may slow down growth (weight and length gain) the infant. Still, formula is not the solution here – improved maternal nutrition, through things like supplemental nutritional support for mothers – is the best solution. And here’s why: maternal malnutrition is most often the result of poverty.

Poverty is more than a lack of money: poverty includes increased infectious disease exposure, limited access to nutritionally dense food or even famine, increased exposure to pollution, increased psychological stress, and increased exposure to interpersonal violence, including war and displacement. None of these situations make infant formula a viable solution to maternal poverty or malnutrition. Infant formula typically comes in a powder that must be mixed with water. In high poverty areas, water itself can be a vector if disease – carrying human/animal waste, industrial pollution, or other disease causing vectors. From an immunological standpoint, the water used to mix the infant formula also has the potential to increase the exposure to infectious diseases. This contaminated water increases the risk of gastrointestinal illnesses, parasites, and other infectious diseases. Water used to mix the formula instead introduces infectious diseases, heavy metals, and many other risks to the child consuming it.

The introduction of pathogens and pollutants from water is an added risk of infant formula 11. However, even under conditions of pristine water, infant formula is still deficient compared to human milk. That’s because human milk is alive12, whereas formula is dead.

Breast milk contains hundreds of known immunological factors such as secretory IgA, immune cells, cytokines, and even stem cells 13. These immune factors are biologically active in the infant and help prevent and fight infections. For example, we know that milk contains immunological memories – literally the immune cells can recognize common pathogens in that environment and direct the infant’s immune system to respond (see here for more details). Milk also contains broad spectrum anti-infectives that help prevent infections 14.  Infant formula contains none of these basic immune cells and cannot provide the immunological support that human milk can16.

Breastfeeding is a highly evolved nutritional system linking mothers and offspring. Milk is species specific and under considerable selective pressure. Milk is highly adaptive, varying across days, infants, and even populations through the maternal body’s unique ability to tailor breast milk to the needs of individual infants. Live at high altitude? More fat in the milk to help with growth. Live in the desert? Higher water and sugar content to prevent dehydration. Live in a highly seasonable environment with wet and dry seasons and wet seasons characterized by high loads of infectious disease? Mothers simply produce milk that varies seasonally, with the immunological factors in the milk increasing during the wet seasons.  Formula can’t do that – formula is not capable of responding to ecological pressures or individual infant needs the way the mammary gland can.

Breastfeeding is not going to be an option for every family, and because of this, there is a need for infant formula (and a much bigger need for programs that support mothers). But infant formula is not the solution for mothers living in poverty or dealing with malnutrition – infant formula is another barrier to optimal health in these situations. Anti-poverty campaigns, support from supplemental nutrition programs like SNAP and USAID are vital. So is access to birth control, prenatal care, and basic health care. All programs the US government considers unnecessary and is proposing massive cuts to.

And sadly, this isn’t the first time the US has threatened another country over the WHO Code. In 2007, while I was living in the Philippines, the US government used similar language and economic pressure to push infant formula in the Philippines, with the US Chamber of Commerce calling WHO Code compliance as evidence of “hostile economic practices” to US businesses.

Breastfeeding belongs in our modern understanding of what public health is, and the many myths about breastfeeding – especially that poverty and malnutrition are barriers to successful breastfeeding and infant health – need to be continually challenged with the facts: breast milk is the optimal first food for infants and anti-poverty strategies and support for mothers will do far more public health good than infant formula.

One thought on “Breastfeeding is the cornerstone of public health: a view from the milk”